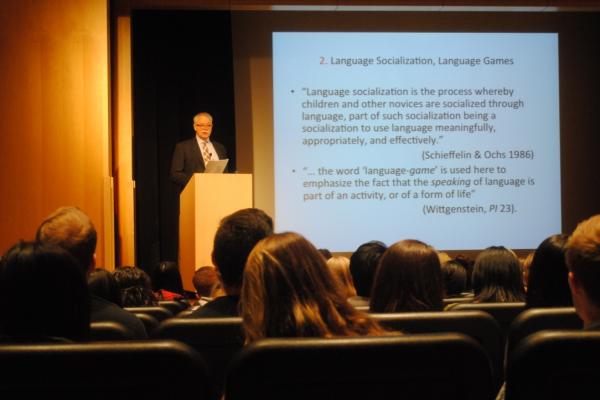 Description
Charles Quinn gave two lectures at Brigham Young University this month. In one, he reviewed instances in the history of Japanese where “afterthoughts”—words or phrases added at the end of an utterance—came, by this re-positioning, to be understood and used in new ways. He introduced the construction with examples such as Dare sore. ‘Who’s that (you just mentioned)?’ and Nan da, are. ‘What’s that (that we mutually perceive/know)?’, and reviewed how pronouns ka ‘that’ (distal/mutual) and so ‘that’ (mesial/new), by being added to the end of an utterance, could in time have become sentence-final particles ka, so and zo (and subsequently, focus particles as well). The same move likely landed adnominally (rentai) and provisionally (izen) inflected predicates at utterance’s end—in what became the musubi position of the kakari-musubi ‘focus-concord’ construction. He also gave present-day analogues of these, and identified afterthought-initiated changes possibly underway today. (Will sentence-final hai become a sentence-final particle? Stay tuned!) The second lecture, “Situating Language and Learners for Communication: the Indexical Dimension,” was for the Colloquium Series of BYU’s Humanities Center, and argued that if skilled communication in a foreign language is a program’s goal, then that program will comprise a regimen in language socialization—which necessarily involves real-time indexing, or pointing to, certain situational variables, from one’s here-and-now. In addition to the familiar indexing of time (“now,” “tomorrow”, tense distinctions), spatial location (“here,” “over there”) and person (“I,” “you”), such variables as regional affiliation, relative position in social space (distance, hierarchies), affect (feelings), and knowledge (epistemic quality) are also routinely indexed. The indexing and reciprocal uptake of such meanings constitute an elemental, essential dimension of human communication and socialization. They are the fundamental reason why specifically situated performance is such a useable and useful organizing unit for foreign language pedagogy—for mimicking, understanding, and improvising. The lecture was followed by a reception in the Humanities Center.
Share on Social Media