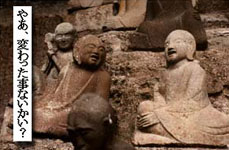 Welcome to the Japanese language program at the Department of East Asian Languages and literatures (DEALL) at The Ohio State University. Here is some important information about our language courses. You may also visit our Japanese Individualized Instruction Home Page to find out more information on that program.

Long-Term Objectives: The ability to be somebody -- someone who moves easily and effectively -- in the culture and society you're studying, by means of the language you're studying. Over the long run, this will come about as you use the language in developing friendships and lasting associations with people who live in that culture and language. But for this to happen, you need to develop a capacity to express yourself in a culturally coherent manner, and to understand the intentions of people who live there, as they express them. For now, the surest step you can take in this direction is to prepare carefully for your next language class, using your ears, eyes, imagination, and intellect as fully as you can, and to make this a habit.

Short-Term Objectives: These will be addressed in introductions to each course, and are also stated as what you are to prepare for every class hour, in every language course.

Self-Managed Work (what you do outside of class, as preparation for live interaction in class).

You will work extensively with audio and multimedia materials. Please visit the OSU Digital Language Lab for audio materials online.

The time required in preparation will vary with the course, lesson, and that day's assignment, but one hour of class commonly takes an experienced learner two hours to prepare -- sometimes more, seldom less.

The general goal in DEALL language classes is culturally coherent performance of the language, that is, speaking, writing, and responding to speech and writing in ways in which natives of that culture expect people to speak, write, and respond. The native we have in mind is a person who is unaccustomed to communicating with foreigners. Given a particular situation (time, place, occasion, social relation), natives of any culture will have certain expectations about other people's language: expectations about what sorts of things might be said or written, which words one might choose in doing so, how one might pronounce, write, and structure those words in grammar, and how all of these fit with how one relates socially and in physical space (posture, etc.) to others. When language is performed in ways that fit such expectations, it is culturally coherent. You can repair (restate, correct) what you've said in culturally coherent ways, too.
The language programs at DEALL use scoring of daily performance as their key means of evaluating student achievement. In every class hour for which preparation to perform (including Fact class quizzes) is assigned, you will be evaluated with a score ranging from 0 to 4, according to the following principles.
Score / Description of what the score means
4.0: Performance is fully culturally coherent, that is, would present no difficulty, discomfort, or puzzlement in interaction with a native. Repair (restating or correcting yourself, requesting clarification, etc.) is self-managed.
3.5: Performance is superior, for the most part culturally coherent. There is little about it to create difficulties, discomfort, or puzzlement in interaction with a native. However, there is some aspect of the performance to make interaction less than maximally coherent for a native. Most repair is self-managed.
3.0: Performance is good: few aspects of it create difficulties, discomfort, or puzzlement in communicating with a native. Self-managed repair alone, however, is not sufficient; you also require occasional repair/correction from another (= instructor, classmate, etc.).
2.5: Performance enables communication, but also presents several clear-cut sources of difficulty, discomfort, or puzzlement in communicating with a native. Repair is largely a matter of correcting problems, and correction comes mostly from others.
2.0: Performance creates definite obstacles to communication, which usually involve more than simple discomfort. Utterances would cause puzzlement that the native is at a loss to resolve ("What is s/he trying to say?"). Repair requires multiple, often repeated, correction and guidance from another.
1.5: Performance shows many problems that would create difficulties, discomfort, and puzzlement in communicating with a native. Communication is achieved only with repeated correction and guidance from another. Clearly not in control of assigned material.
1.0: Attended class, but either (1) chose not to participate (for this option, notify your instructor before class begins), or (2) failed to perform with any culturally viable degree of competence.
0: Absent.