Majors and students of Chinese, Japanese, and Korean are given the following opportunities to engage in original research. 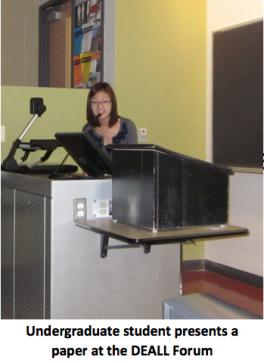 The department annually offers the DEALL Undergraduate Forum as a platform for undergraduates to present their research to their peers and to faculty. Students develop their research in the context of a regular course or in independent study with a faculty member.

The forum takes place every April. Students interested in presenting their research should talk with a faculty member in their area of research and/or the DEALL undergraduate director, Kirk A. Denton.

The Department also encourages its students to participate in the annual Denman Undergraduate Research Forum, a university-wide opportunity to showcase outstanding student research.

DEALL students can engage in research in the contexts of the following DEALL courses (offered in Chinese, Japanese, and Korean versions). Students must work with at least one faculty member.
4193: Individual Studies
Students work one-on-one with a DEALL faculty member on a topic decided upon in consultation with that faculty member.
4998/4998(H): Undergraduate Research: Project
Students engage in original research that leads to the completion of a project other than a conventional thesis (e.g., a translation, the production of a play or a film)
4999/4999(H): Undergraduate Research: Thesis
Students engage in original research that leads to the completion of a written scholarly thesis.
As of spring 2011, OSU offers "graduation with research distinction" and "graduation with honors research distinction" to those students who complete a research thesis.
DEALL honors students working with this department's faculty have completed the following theses:
Katharine Anne Gabele (2004, Japanese minor)
"Places, Faces, and Spaces in Between: An Exploration of Setting and Identity Formation in the Works of Japanese American Women Authors"
Advisor: Professor Naomi Fukumori
Christopher Merkel (2004, Japanese major)
"A Translation from the Japanese of 'Koku, The Void' (1950), by the Japanese novelist Haniya Yutaka (1910-1997)"
Advisor: Professor William Tyler
Anita Allen (2004, Japanese major)
"A Comparative Study of Early Childhood Discipline in the United States and Japan"
Advisor: Professor Etsuyo Yuasa 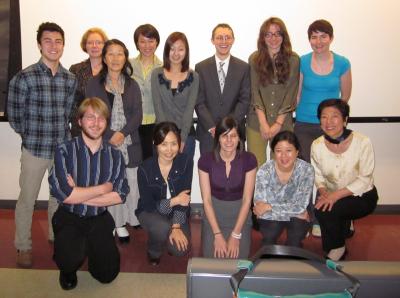 The university offers multiple funding opportunities for undergraduate students to engage in research. For information, see the Undergraduate Research Office funding page and the Arts and Sciences Scholarships and Grants page.