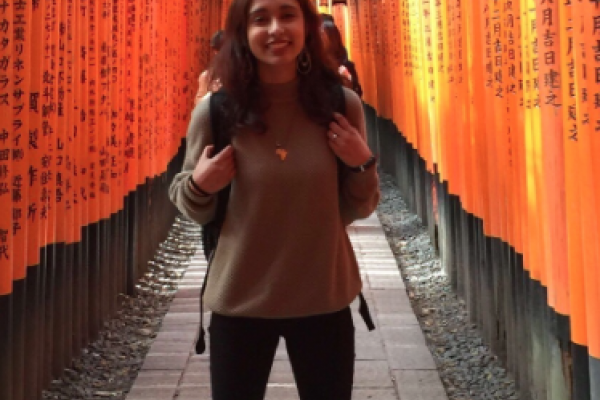 How did you get interested in Japanese? What inspired you to major in it?

I took Japanese on a whim as a freshman in high school and fell in love with it instantly! Japanese became a cultural bridge to communicate with thousands of people on the other side of the world, and that was what drove me to pursue Japanese further in college.

Have you ever studied abroad in Japan? If so, how did this impact your language skills and understanding of a foreign culture?

I studied abroad during the 2015-2016 school year at Nanzan University in Nagoya, Japan. No matter how much one studies a language and culture, there really is nothing like experiencing it hands-on. My fluency greatly increased during my time in Japan, and although there was some culture shock at first, being immersed in a foreign environment makes one assimilate rather quickly. When I came back to America, my parents and friends had even commented on how “Japanese” I had become!

What was a typical day like for you while you were in Japan?

When I was in Japan, I lived in an international dorm, where each apartment was composed of three international students and one Japanese host student. Little things that we take for granted in America are very different in Japan. I had to become adjusted to wearing slippers just to enter the bathroom, bringing gifts, or omiyage, when I visited my friends’ houses, and other such cultural norms. I have several dietary restrictions, and eating out was often tough for me, so I had to teach myself how to cook Japanese food while I was there as well.

What do you hope to accomplish after college with your knowledge of Japanese?

It has always been a dream of mine to hopefully someday obtain a job relating to diplomatic relations between the United States and Japan. However, teaching has always been a passion of mine as well, and I am keeping all doors open.

What is a favorite Japanese phrase or expression of yours? What does it mean, and why is it meaningful to you?

My favorite Japanese phrase would have to be いただきます(itadakimasu), which is a phrase that people in Japan say before they begin a meal. Many compare it to what we would considering “saying grace” before a meal, as itadakimasu roughly translates to “I humbly receive.” My friend in Japan once explained that the word itadakimasu is not about giving thanks for the food, but giving thanks for the hands that took the time and care to prepare that food. I think it is a simple, but important phrase in being more aware of one’s blessings, and it is a phrase I use at every meal, even today.

What is a Japanese delicacy that you would recommend to others?

I would highly recommend something called omuraisu, or omelette rice, which is composed of rice pilaf, wrapped up in a fluffy omelette. It is easy to make yourself and super delicious too!