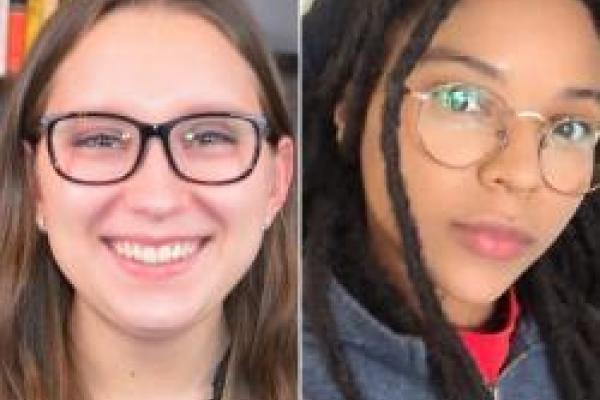 Two Ohio State students have been awarded NSEP Boren Undergraduate Scholarships to study in Korea during the 2020-21 school year.

Victoria Washington, a junior with a major in Korean and a minor in Chinese from the Department of East Asian Languages and Literatures, will study Korean language and culture at Sogang University’s Korean Language Education Center in Seoul, South Korea. She plans to volunteer with Teach North Korean Refugees (TNKR) to extend Boren’s impact through scholarship and service.

“Being chosen for the prestigious national security scholarship is nothing short of a dream to me as it enables me to pursue my passion for critical language acquisition and national security,” Washington said.

Caitlyn Bahm, who graduates next month with a degree in security & intelligence from the Department of International Studies and minors in Korean, Spanish and global public health, will also study at Sogang University. Her courses will focus on Korean language and culture as well as East Asian relations.

She said the immersive program is an incredible opportunity to develop her language skills, cultural competency and understanding of regional relations. After completing her Korean minor, Bahm said she’s excited to live and study in Korea for a full academic year.

David L. Boren Scholarships and Fellowships are sponsored by the National Security Education Program (NSEP), a major federal initiative designed to build a broader and more qualified pool of U.S. citizens with foreign language and international skills. Boren Awards provide U.S. undergraduate and graduate students with resources and encouragement to acquire language skills and experience in countries critical to the future security and stability of our nation. In exchange for funding, Boren award recipients agree to work in the federal government for a period of at least one year. Scholarships provide up to $20,000 to U.S. undergraduate students and up to $24,000 to U.S. graduate students.

They lived in 39 countries throughout Africa, Asia, Central and Eastern Europe, Eurasia, Latin America, and the Middle East, studying 30 different languages. The most popular languages include Arabic, Mandarin, Russian, Portuguese, Swahili, and Hindi.

Since 1994, over 6,000 students have received Boren Awards. Boren Scholars and Fellows represent a vital pool of highly motivated individuals who wish to work in the federal national security arena, and program alumni are contributing to the critical missions of agencies throughout the federal government. An independent not-for-profit founded in 1919, IIE is among the world's largest and most experienced international education and exchange organizations.

Undergraduate and graduate students interested in applying for the Boren Awards should contact Rebecca Bias (bias.3@osu.edu) at the Center for Languages, Literatures and Cultures.

This story originally appeared on https://cllc.osu.edu/news/two-ohio-state-students-receive-prestigious-nsep-boren-award-study-korea